The visage is the portal to identity. In Maneesha Doshi’s latest body of work, the artist focuses on head studies of fantasy beings, whose inner world is revealed to us through the headgear that they are adorned with. Their faces are often androgynous and their frontal gaze, confront the viewer. Yet they appear to be looking within. This duality is peculiar to most of Maneesha’s work for while the world created by her through her paintings is corporeal and organic it is also spiritual and ethereal.  The world of trees, flowers, still-life and mountains, merge with that of architecture and concrete.  These worlds are unified through Doshi’s painterly intervention where all aspects of humanity and nature bound together by a general sense of love and self-discovery.

Headgear is usually worn by kings and those belonging to tribes, observes Doshi, however these beings belong to contemporary times, even while they are drawn from various historical references. In Doshi’s world they perform multiple roles and purposes. Historically, the wearing of headgear has been attributed to various reasons, for protection, fashion, disguise, entertainment, religion, medicine, decoration or even distinction. Under Doshi’s hands the headgear becomes an extension of the wearer’s personality, their world both physical and mental and an aura of their existence.

Maneesha does not ponder whether her work is to be categorized as Indian or contemporary whether it is current or historical before she begins to paint. That is perhaps because her work is enmeshed with several vignettes of the contemporary, certain underpinnings of the historical, positive realms of spirituality and tones that are deeply earthy, worldbound and yet inherently Indian. One may see these aspects coming together innately in her work that is characterized by its own internal lyricism and rhythm.

Maneesha’s works do display the frontality of Byzantine and early Greco Roman painting where their direct gaze is intended to engage the devotee. It has been historically documented that the icons were designed for devotional purposes and to help people better understand the figures they prayed to thus bridging the ‘gap’ between the divine and humanity.

It has also been observed that in her work the resonance of the object often ‘moves’ to the human body.  In this instance however the objects, the containers and the human head-study have melded together in a continuity that unifies them and brings them into a cryptic dialogue with each other. It is never a direct symbolism that may be read simply but a layering of complex identities, thoughts, objects and intuitions that completes the persona of these protagonists.

Another interesting aspect to be noted is that in this series Maneesha has rendered her painterly expressions upon a traditional two-dimensional surface like, canvas, board or paper, as well as included a sculptural, third dimensional aspect in her work. Creating large cut-outs fashioned out of canvas on MDF waterproof, she has painted upon them including aspects of their physical qualities like circular shaped voids and cutouts. The surface becomes enlivened, textural and reaches out beyond the typical two-dimensionality of the painted surface that is employed to create optical illusions, perspective or ‘depth’ in two-dimensional works.

The idea behind moving to work on the cutout was to break away from the conventional idea of the frame. Hence Maneesha started with small shaped cut-outs which in a way brought in certain depth and shadows and added an element of surprise.  The smaller works led to larger freestanding cut-outs, which add a sculptural element to the painting.

For a painter this might be a slightly unconventional use of implements to push her artistic language even further. It may be observed in the composition, that the human visage remains at the center of the composition while Maneesha has rendered the headgear through a strategic use of voids and presences, outlining  a human shape that stands spectrally  as a mute observer or a statuesque piece of architecture. Viewers and fellow artists who are familiar with Maneesha’s work can easily observe the melding of human forms with edifice, or where plant and animals merge into one body, since that is characteristic of her style. In the Later Renaissance period the development of a genre titled “monumental still life,” showcased a grand coming together of objects both alive and still-life and it is perhaps a subconscious exposure to this great union of forms that Maneesha is tapping into.

In her previous exhibition, where she has referenced the body to the city, she drews it out to the point where the body ‘became’ the city, taking on aspects of its transport, light and architecture. In this body of work Maneesha has moved on to the head and its study, transferring aspects of the city and objects to the visage.

This incongruent merging of forms may be observed in these earlier paintings. In the instances of the head gears, one observes the edifice merging with a water-pot, a vase, a crown, a holy candle, a set of sharp knives, an animal or a supine form, which is often loaded with the iconography of early Egyptian art.

Finally, one must engage with and appreciate these wearers of the headgear to understand them within the aspects of selfhood. While they reflect society, they also signify the self, as they speak for the universe, they likewise murmur for the individual, while they celebrate and conquer, they are also reflective and introspective. Their multiplicity and cultural richness are indeed a lot to collect and ponder over and contemplate. 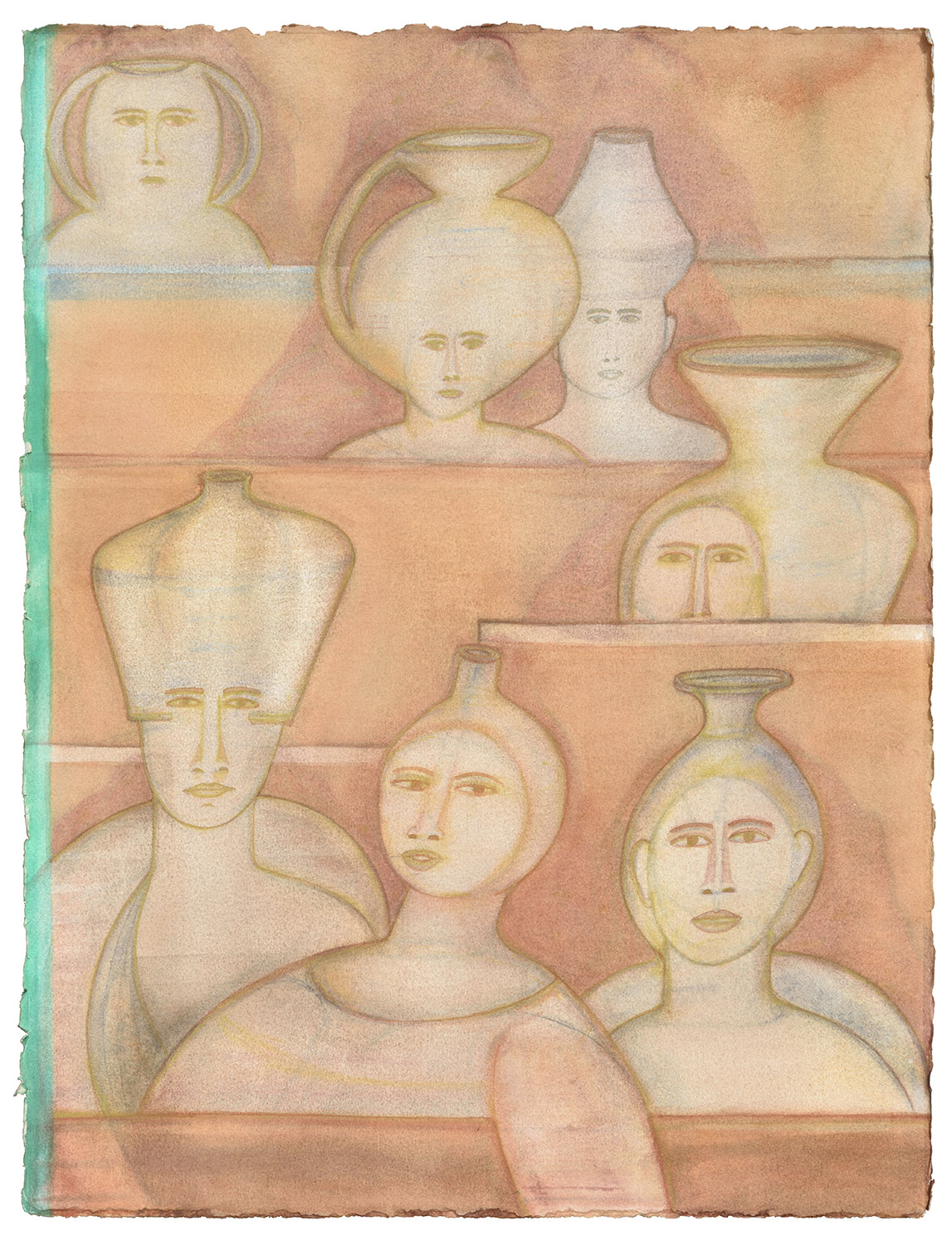 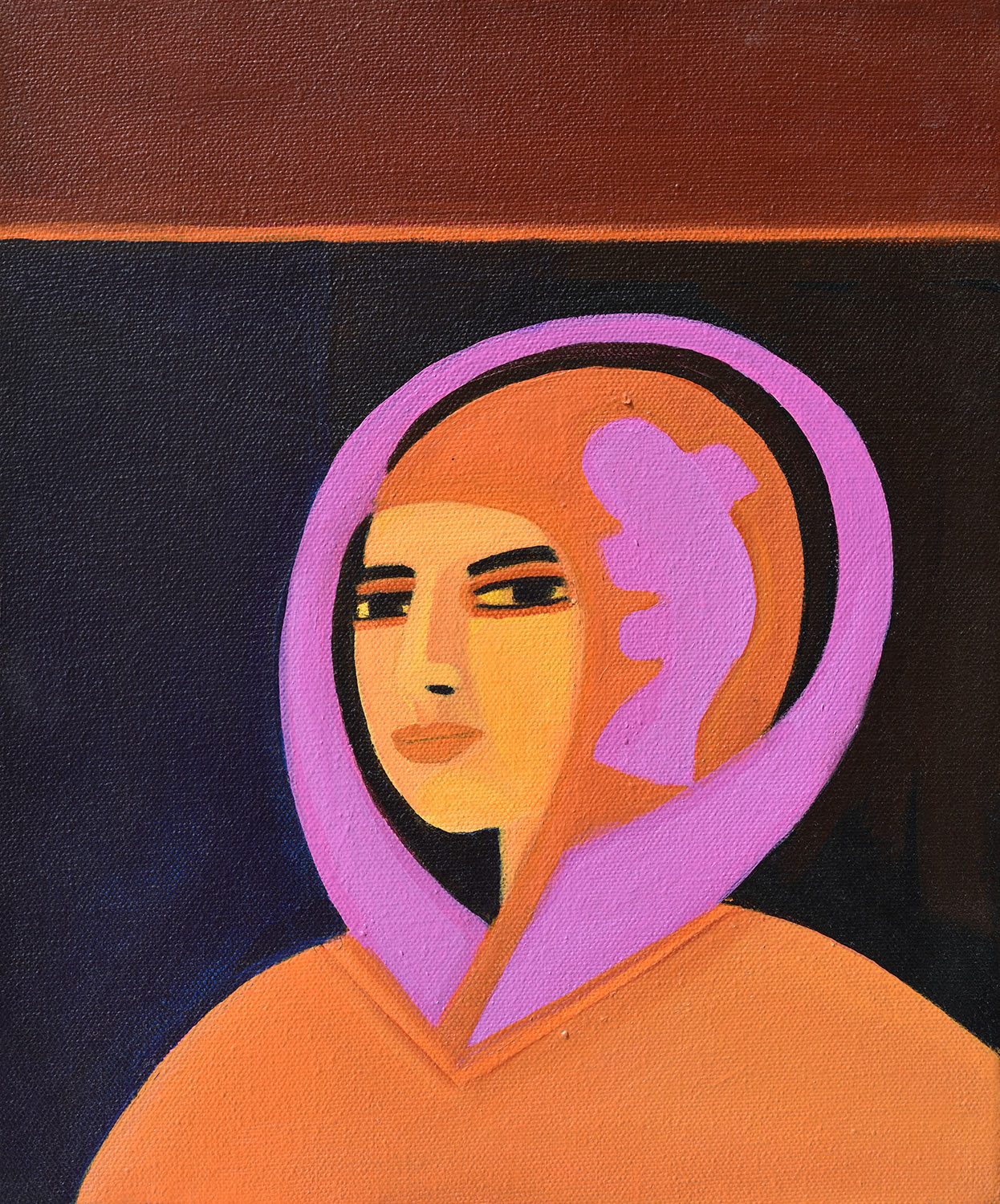 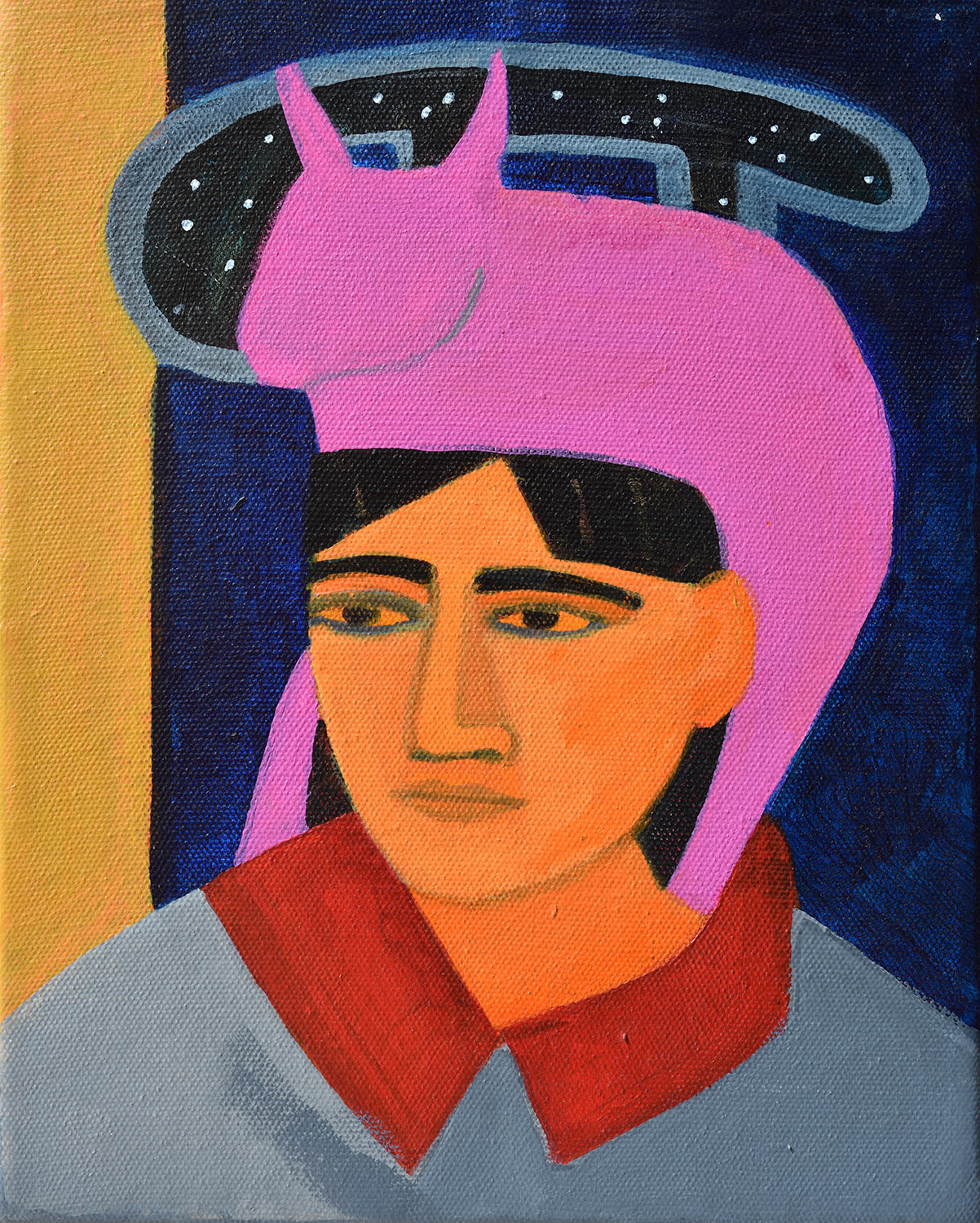 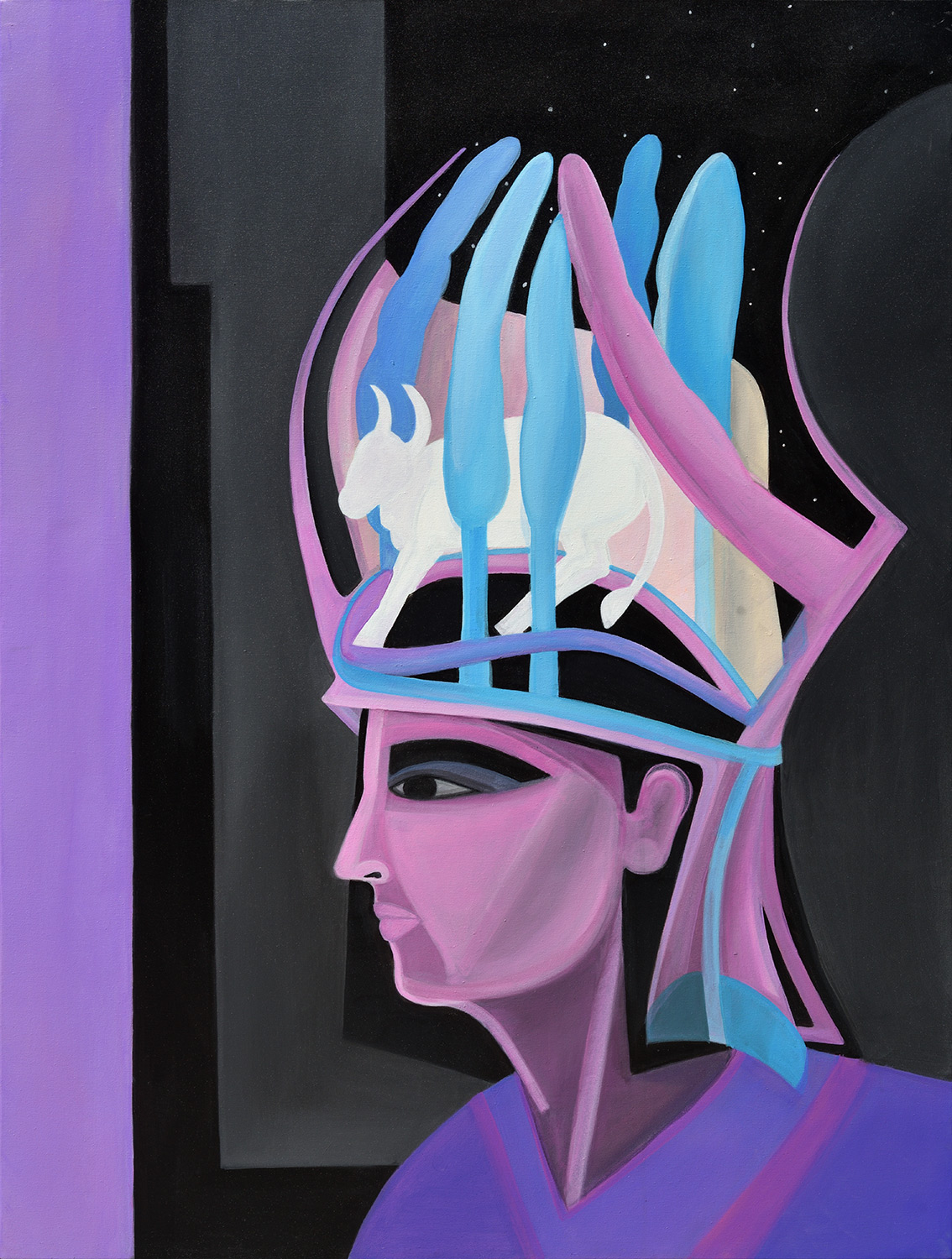 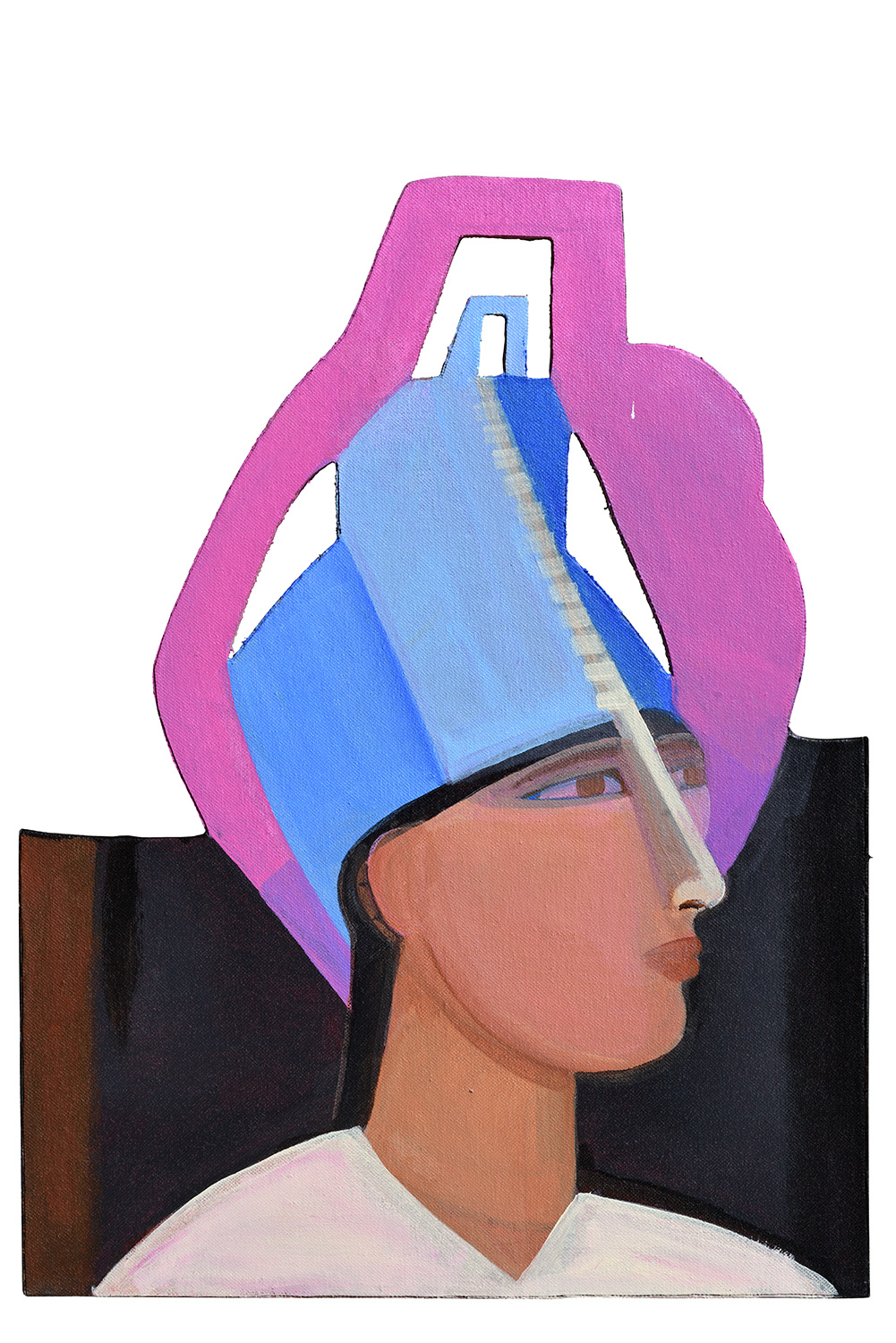 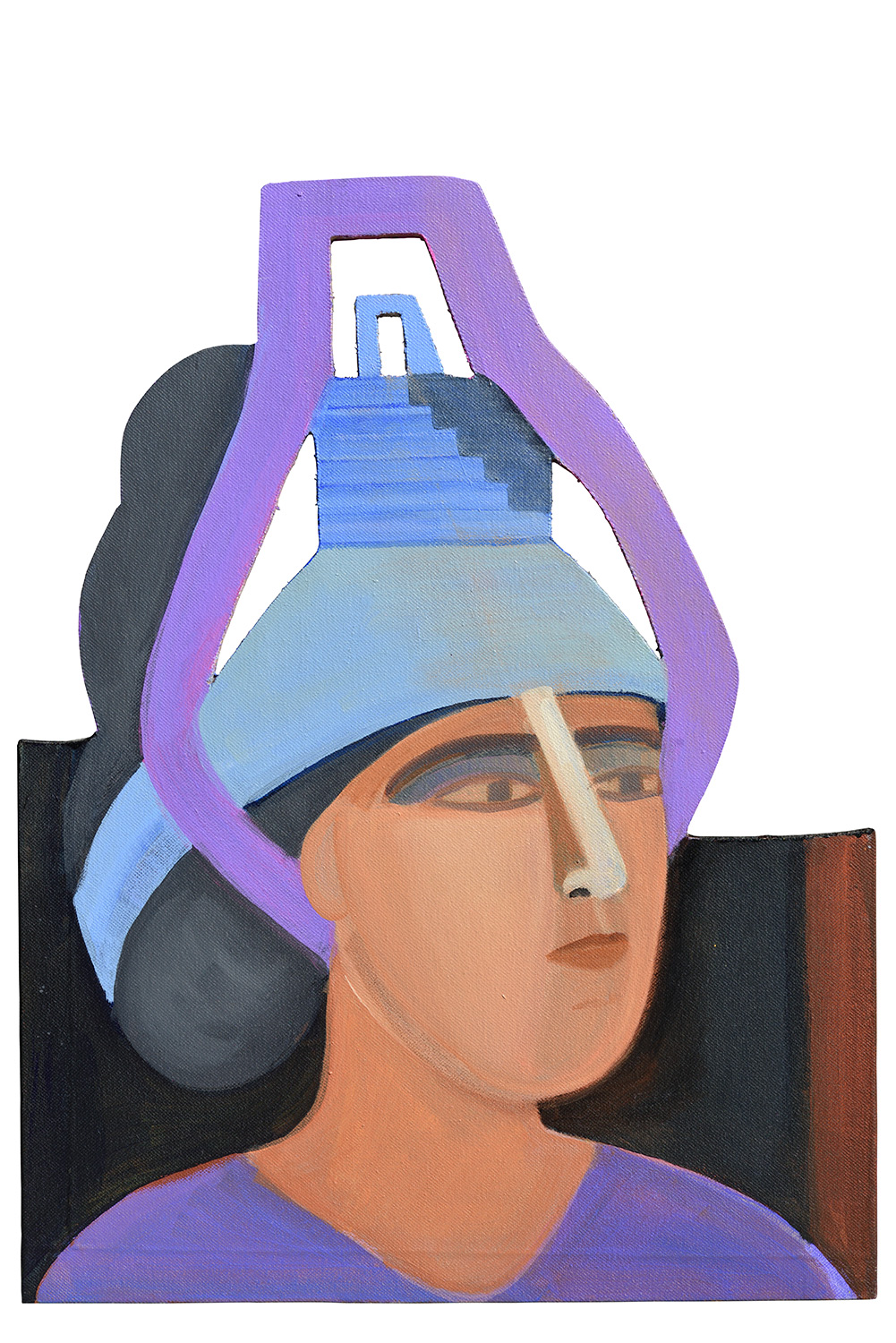 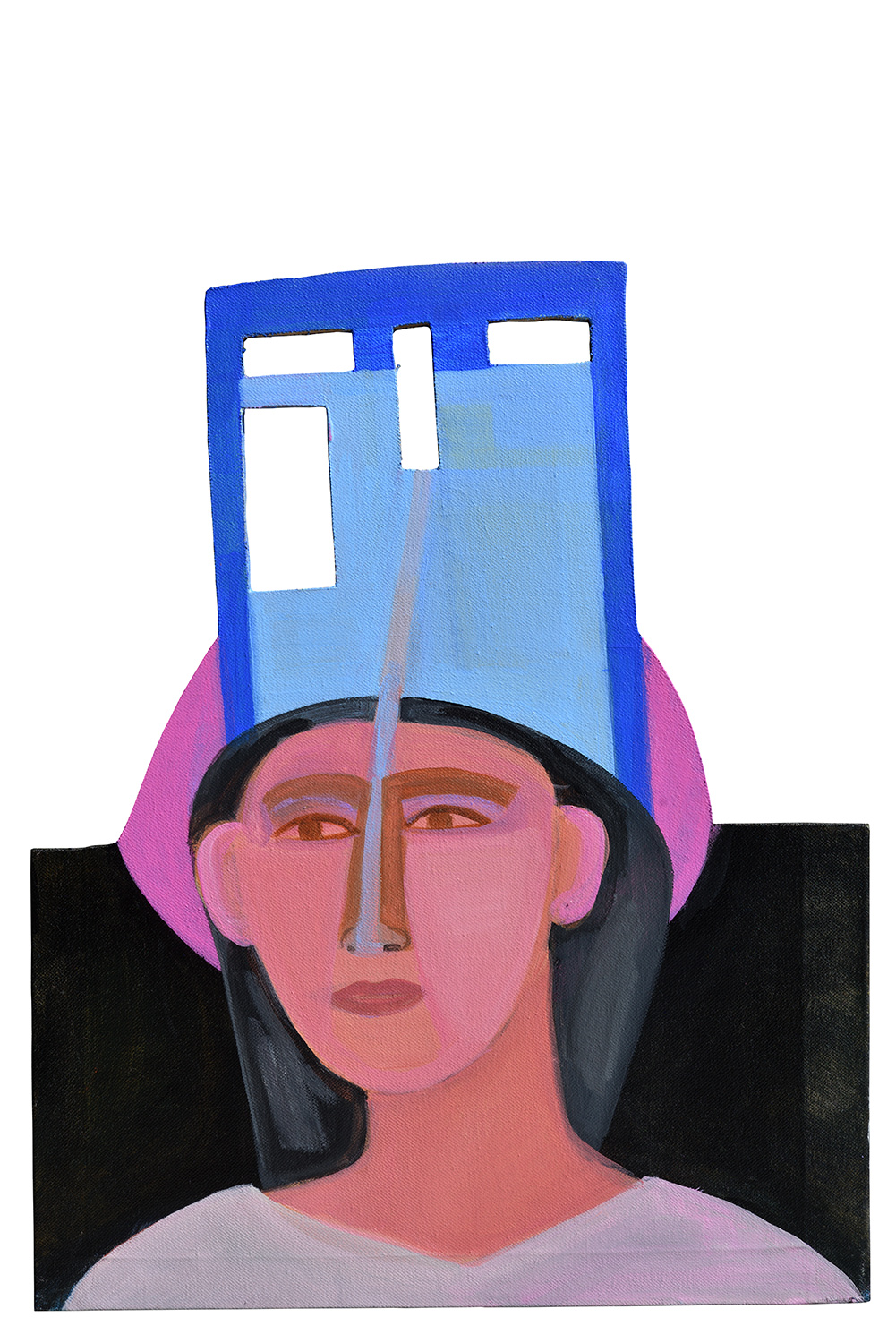 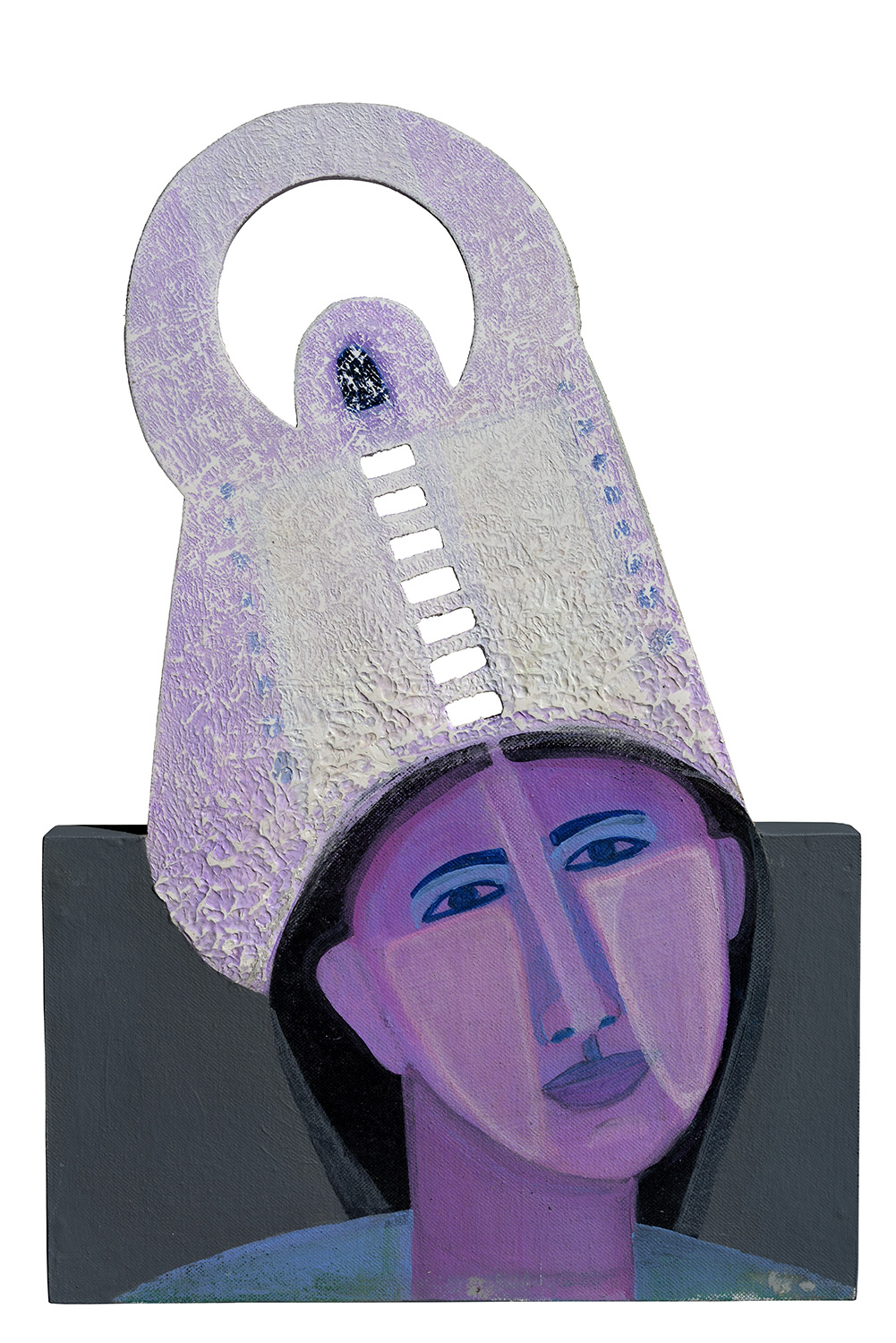 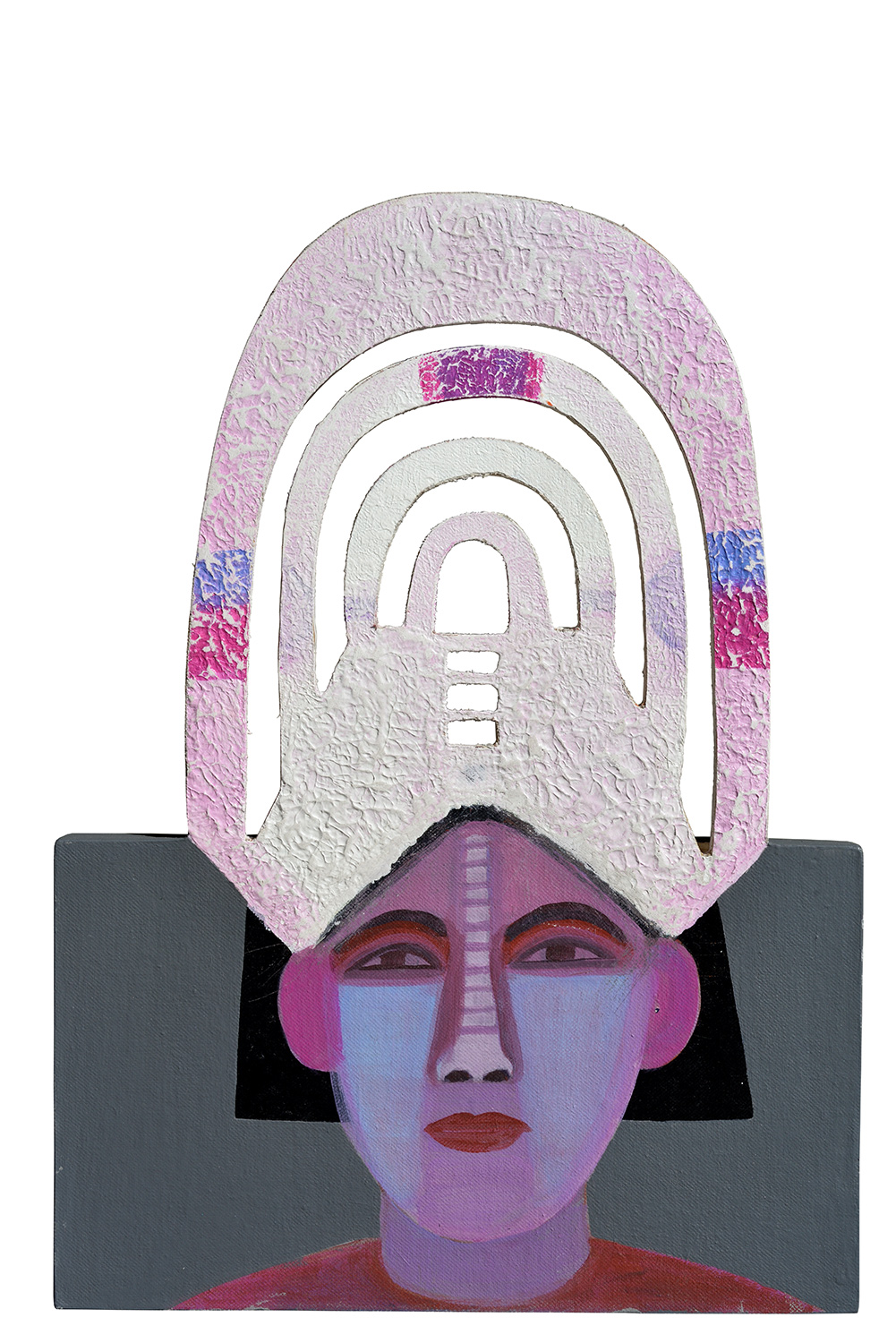 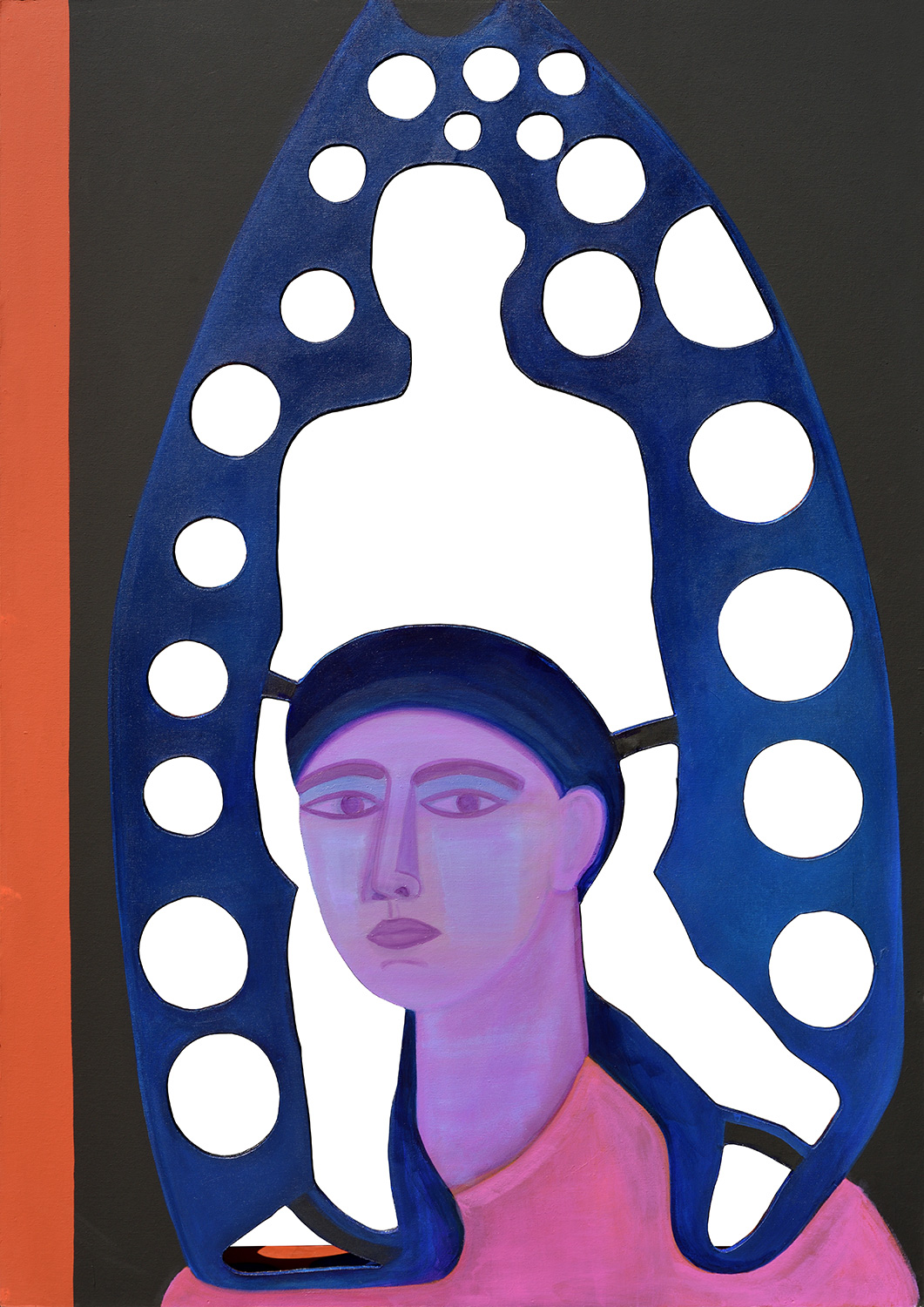